STERLING – St. Mary’s School students on Friday learned to make a meal that started with a healthy apple almond salad and was capped by a dessert of wormy pizza with whole-wheat tortillas.

The school’s “microwave chef” event was inspired by the Food Network’s “Iron Chef America” show. But the students used microwaves to cook their ham and cheese roll-ups instead of open flames. 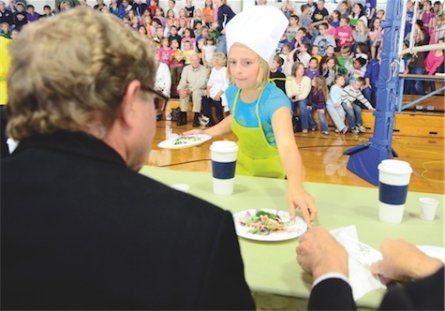 The Fit Fun for Kids assembly was part of a health initiative at the school which includes the CATCH (Coordinated Approach to Child’s Health) program.

Three third-graders were chosen as sous chefs, while three fourth-graders were food couriers who took banana boats and cookie cutter nacho sammies to the judges. Three students each from grades five through eight were the chefs. The students were divided into teams to work together on their culinary creations.

The student chefs were chosen based on essays judged by students from Newman Central Catholic High School’s National Honor Society.

While students topped their strawberry delights with whipped cream or adorned their mixed salad greens and fruit with cinnamon tortilla strips, they were captured on a live video camera. A live feed was sent to a projector so the audience could watch.

The “red” team won because it was very conscious of presentation and well organized, said their supervisor, second grade teacher Maureen Gaimey. The team had two people work on each recipe, she said.

While the student chefs chopped red peppers and blended smoothies, some students were pulled from the audience to participate in the school’s version of “Fear Factor.”

A pomegranate, mango, avocado, pear and plum were placed in the hands of blindfolded students, who were asked to guess what they were holding. After guessing, they were challenged to eat the fruit.

Principal Tom DePasquale said he thought the students enjoyed the activity and that the event provided a good nutrition lesson.

“We felt it was important to teach them to make a healthy meal,” he said.

The school has not decided whether it will have the event annually, DePasquale said.

The recipes were created by Jill Walter and the nutrition team was from Destination Fitness.